What do Memorial Day and Labor Day have in common? They are both American holidays, yes, but also similar in that I usually spend them sunburnt and on a beach—a bad combination according to my dermatologist.

We have beloved family that owns a few beach houses on Ocean Isle—roughly 45 minutes from Dirty Myrtle, which I haven’t yet been to and which, given its reputation, I may never willingly attend—so we frequently visit. It’s 4 hours from Charlotte and just the right size of town to where, if you don’t live there, you don’t know everybody, but you might know somebody. I’ve run into kids from middle school during the town-wide concert that happens every Friday in the summer. Last week a 1960’s hit band, the Tams, played to a roaring crowd. I usually duck for cover upon seeing acquaintances—I’m the sort of girl that was an awkward, ugly duckling until age… well, now… so running from my past is a pastime—while, on the dance floor, old biddies shag in the corner and one balding man with a beer belly gets too far down to get back up again.

It’s a bit of a wonderfully strange town. The homemade ice cream on island is worse than the chain of shaved ice on the island and the sundae store just across the bridge beats them both. There’s a few guys who ride around in a lifted truck with something super southern emblazoned across the back of the lift gate, yet, more often than not, they’re bumping to rap music. There’s the requisite quality surf-shop which is filled to the brim with surfer dude/Cali girl brands, like Costa, Maui Jim, Hurley, RVCA, alongside Southern Tide, Lilly Pulitzer and other prep wear that could be seen on what my cousin once called “an total Chad” (i.e. frat boys and sorority girls) during game days at Ole Miss.

Drift, the local cafe, coffee shop and wine bar (triple threat), is one of my favorite coffee houses to date—though any place that keeps me amply supplied with both caffeine and vino tinto is more than welcome to join my list of global retreats. Being the only place on the island, it is the happening place in the morning. We generally roll in around 8:45, having rolled out of bed, brushed our teeth, and put on swim suits with a coverup rather than normal clothes, and still we wait for seating. The coffee is well-worth it and the decorative and yummy food is added bonus. I’m not a huge fan of the banana bread, given the mascarpone lumped atop is sadly not my favorite cheese on market, but the avocado toast is excellent. Typical millennial. 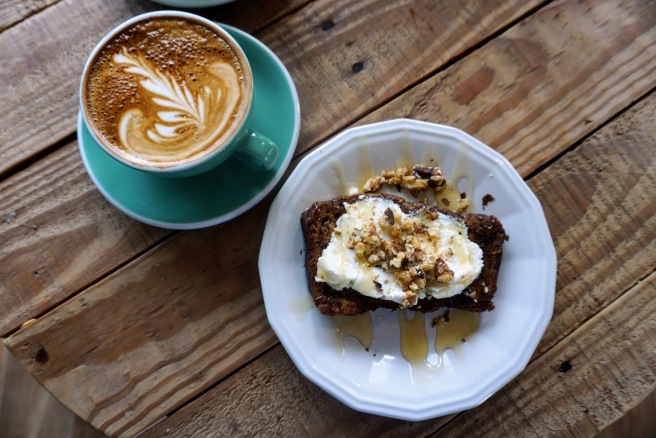 Just off-island, through still within the limits of Ocean Isle, is Causeway Gourmet. Their best food is not so gourmet, but rather soups and sandwiches. Basic doesn’t exclude delicious, however, and they give many of their items special southern flair. Specials may be called the Carolina Cuban, with pulled pork, both mustard and vinegar-based barbecue sauce, a slice of sweet ham and pickles, or a Southern Reuben, again featuring ham in place of the more traditional brisket. Sides include a few variations on pasta salad, a likely little-ordered fruit cup, chips. But dessert is where the fun starts—key lime pie, banana puddin’ (drop the ‘g’, we’re in the South), coconut creme pie and lemon bars.

Dinner is mandatory at the Inlet View, a restaurant a mere 15 minutes away from OIB and down the street from of a 2000-year-old oak tree whose claim to fame was being alive with Jesus, though on the other side of the world. The intracoastal waterway offers gorgeous sunset views, but call ahead—they don’t accept reservations. The hushpuppies are amazing and so’s the soft shell crab, if you can stand eating the shell like a regular. I haven’t quite yet conquered the crunchy. An overwhelming majority of their seafood is locally caught and farmed, so nearly all the shrimp, fish, and shellfish are incredible. During oyster season (i.e. that tomato-red Labor Day we mentioned earlier), you can find me with a piña colada in hand, on the deck, delicately wolfing down the Walrus’ friends, potentially with a little pepper and vinegar sauce.

I’m currently nursing a bit of a sunburn, so I may not be back at Ocean Isle for a little bit yet, but you can almost guarantee that one day you’ll see me again at the Friday night hoedown throw down—singing to songs older than my father, marveling at how all the women on the island are so in sync in their line dancing, and dodging middle school acquaintances.

I’m busy working, crafting a blog on how it’s totally acceptable for me to curse in Spanish in front of my parents, and packing up all of my belongings to drive 4,000 miles to San Francisco and start life anew. Catch up with me next month, mid-journey. XoXo, Fernweh