Whew! It’s been two months since I’ve posted anything and it’s been a whirlwind of a time. More stuff has gone on than you can possibly know, and so, while I’d apologize for my absence under normal circumstances, I’m not going to. Food and I have moved flats after having difficulty with water damage and mold poisoning, we’ve traveled to four countries in as many weeks, and visited with family and friends over the course of the holidays. Anyhow, as the culmination of a process 13 years in the making, Food finally graduated from high school in the midst of all the craziness, and, on Tuesday of last week, we decided to take a little trip in celebration. Ten minutes later we had flights and beds booked in Berlin, and we were set for Germany on Friday.

4 countries in 4 weeks with this little lady

Fast forward three days and we were sort of regretting that decision as we sat on the tarmac of El Prat de Llobregat, having gotten off our plane due to it an electrical failure. We had been taxiing down the runway, and the plane started doing the loud humming about-to-take-off noise it always does, when, all of the sudden, everything went black and the plane stopped moving. Talk about alarming. Three hours later we’re beginning to think we’ll be returning to our flat and hanging out with our besties Ben & Jerry when we are hustled onto buses yet again and returned to the same damn plane they told us not ten minutes earlier would be impossible to fix. The guy behind us muttered “Oh shit.” and we knew we better start praying.

Fortunately, the rest of our flight passed uneventfully and we landed in Berlin a few hours late, but in high spirits. The second they opened the cabin door we knew we were in for some fun. Can you say freezing? The temperature was -5 Celsius, so like 23 degrees Fahrenheit. And we’d just come from Barcelona, which, as I’m writing this, is a balmy 61. We were super thankful we’d bought actual jackets a few weeks before and were also acting like five-year-olds pretending to be dragons at the fact that you could see your breath.

We chose to stay in a hostel this time around, just to try it out, and, by the end of the trip, we were super glad we did. There’s nothing quite like making friends in moments to endear you to a new city, and within thirty minutes of being in Circus Hostel, we’d met and knew the names of all our bunkmates. Despite getting in late, we decided to rush to dinner and then do some midnight sightseeing. Food had looked up a half a million restaurants in which to go during our day there, and so we chose one with what TripAdvisor described as authentic food.

I was in heaven. I’m not a beer person, but this beer, the house lager, was really REALLY good and my… something I chose at random off a chalkboard on the wall upon which the menu was written in all German… was absolutely delicious. Food chose something else, which came with mashed potatoes that tasted like a cloud on your tongue. Perfection. Despite the fact that Hackenthals Gaststätte was a thirty-minute walk in the freezing cold, I would do it all again for another chance to have that meal. After dinner, we bundled up and headed out to the Brandenburg Gate, but stumbled upon the Berlin Wall after getting lost on the way to the metro. Some random man had to help us figure out which metro to get on due to all our phones dying, and we took some ridiculous pictures in front of the gate, posing ridiculously because it was 1 AM and there were only two other people within eyesight. Oh, and we got pizza on the way back to the hostel – because the only thing better than having dinner is having two dinners.

Our next morning started early, for us, with, what else, a coffee. Oh, and snow. Quite a bit of it. We spent most the day with a new friend of ours – Harry from Australia – who had been in Berlin for a few days and suggested a few places along with taking us to see a few he hadn’t gotten around to yet. Our first stop was the East Side Gallery, which we walked down quite a ways, taking a series of photos of mostly us and sort of the wall and street artwork that liberally decorates it, before deciding we were cold and wanted brunch. Madison’s earlier restaurant search had turned up a great place for eggs Benedict, Papilles, and so we grabbed a metro to the other side of town.

All you need is Berlin.

One coffee, two plates of avocado on toast, three plates of eggs Benedict, and four hot chocolates later (Don’t look at me – Food’s stomach is a bottomless pit, and shockingly her body does not betray her immense appetite.) we decided that TripAdvisor had advised us correctly and also that the prices at this place were quite good. 6€ for one of the best eggs Benedict I’ve ever had (and I’ve had more than my fair share) is just peachy.

Harry and us parted ways so we could head over to the Reichstag for some quick photos. Pro tip: you can make an appointment online here to view the dome from the inside, which we did, but it was closed due to weather. Food questioned whether people in Berlin can deal with a few inches of snow in the middle of January, and then posed the ludicrous idea of going to get ice cream. I quickly vetoed that, because, as dedicated as I am to frozen chocolate goods, it was literally freezing and she had clearly lost her mind.

We next went to the Memorial for the Murdered Jew of Europe, a mere five minute walk away, which was not only incredibly cool but also oddly sobering even when covered with a layer of beautiful fresh snow. The large cement columns had this odd effect of making you feel a bit isolated despite the fact that there were groups of people meandering through the blocks along with you. 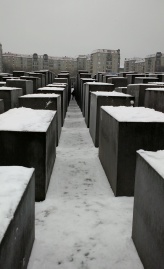 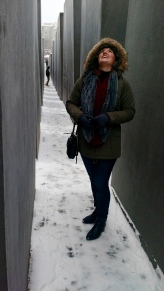 We spent so long there just getting lost and taking photos for other people that we decided upon a coffee break before heading to Topography of Terror, a museum documenting the rise of the NSDAP (or National Socialist German Workers Party/Nazi Party), their takeover of every branch of the German government and community structures, and the subsequent atrocities along with the aftermath thereof. I was alternately immersed in reading everything available and being horrified at the thought of people being okay with any of this, however the exhibit showed well how those who protested were quickly silenced and any who had any sort of relationship with anyone deemed a political prisoner or anyone outside the Volksgemeinschaft (Nazi People’s Community) were not only publicly shamed, but often became prisoners themselves. Food, a bit less interested in history than I, waited patiently for me to finish my long walk through the museum and then told me I couldn’t go to anymore, it was 8 PM, and her feet hurt. However, I snuck in a little quick trip to Checkpoint Charlie on the way home, which just so happened to be around the block near the metro we needed to take back to the hostel.

Our dinner in the evening was at a pub, Sauerkraut, directly across from our hostel – in deference to Food’s feet – with Harry, who very conveniently speaks German. I had some killer burgers, Food had a massive sausage, and all was well. Then Harry decides upon a celebratory shot, and we stop by the single most smoke-filled bar that probably exists on this earth for all of five minutes before he announces that he probably has stage two cancer merely from breathing in all the fumes and that we need to leave. Reasonable.