Sitges and beaches. Fun fact – those two words rhyme, which we discovered when we were pronouncing it “sit-gez” and no one had any idea of where we were planning on taking a little weekend trip. After being corrected, Food still can’t remember to pronounce it correctly, however, she enjoyed the coastal town no less for her inability.

There's something about cobblestone streets. #Sitges and #GoldenBeaches

Getting from Barcelona to Sitges is easier than traveling around Barcelona itself. From Estació de França or Passeig de Gràcia, you can take a Renfe Rodalies train straight to Sitges in around an hour and pay a grand total of less than two bucks. There is no shortage of hotels, restaurants, bars, clubs, and ways to entertain yourself once you reach your destination and the town itself is charming and has a very laid-back feel.

Our first night there we went to Big Al’s, a burger joint renowned for their unique combinations. We opted for their famed nachos to start, which came with heaps of jalapeños. I ate them and Food refused to touch them. While the burger of the week was a glazed donut with two patties and multitude of toppings, Food and I opted for a more toned down burger with mushrooms, caramelized onion, and lots of melting cheese. After weeks of not having American food, it was delicious, as you could have guessed.

For the next day, our original plan was to go to a topless beach and then spend half the time deliberating on whether or not to take off our tops and the other half the time procrastinating on taking off our tops, but the weather saved us by being overcast and a bit rainy. Rather than risk the rip tide, we decided to wander around Sitges, get a bit lost, and take very stereotypical tourist photos. Food made me do one of those #followmeto things against my will, which was absolutely unbearable and my entire arm was revolting against it.

The photos ended up with my fingers looking like sausages and my arm looking roughly like a male mannequin, so really, who’s winning, Food? The entire area was cute and had a quaint feel despite being a rather populated town, and the mostly-whitewashed walls reminded me of Santorini, Greece. One thing I noted multiple times was that Sitges has fabulous doors. If I was good at photography I’d totally make a book called Las Puertas de Sitges or probably something a bit more poetic and less literal.

Our food and drinks of the day came from both Cafe-Bar Roy and 33 Sitges (and then a number of bars and clubs because we are young and can still do that). We went out for a late lunch on a walking-only street (there are lots of those) and just stopped by Cafe-Bar Roy for some patatas bravas and espressos, which does not seem like it goes together, but both tasted just fine to my mouth. Our dinner was at 33 Sitges, which honestly was a bit of a splurge, and we were definitely the youngest people in the restaurant, but it was so dang good! I ordered the Thai duck and Food chose the chicken curry, and both were absolutely fantastic. I haven’t had tons of duck in my life, but I don’t know at what point I’ll have duck better than this duck. After getting the check, we were offered shots of some very sweet Moscatel, which is in the same family of grapes as Moscato, but has a slight bit more of a bite.

We spent the night dancing our way down the quite aptly-nicknamed “Street of Sin” (actually named Carrer Primer de Maig), first in Bar 7, which we learned upon entering caters to the 45+ LGBT tourists and community, then in Pachito, which catered more to 25-40 year olds, and after meeting a few very persistent Brits, we finally escaped to the dance club across the road which was, if memory serves correctly, called Bali. I thought I was the oldest person in this club but soon learned differently after hearing one guy I was dancing beside was 25. I’d have thought he was 17, but height is a fickle thing.

After waking up the next morning, we hit up La Pícara, as Food had TripAdvisored her way to “hear[ing] they have great tapas”. I ordered fish, but had no idea what I was getting into. My fish came out and it could very well have just swum off the plate aside from having slices of lemon shoved in its still very present skin. As the waiter placed it on the table I stared down at it and then, when he didn’t flourish a ridiculously long knife and debone it – as I was really hoping he would do- but rather backed away slowly, I gave Food a look of despair. I was too little prepared and too much hungover for this. I’m not one to quit – particularly when it 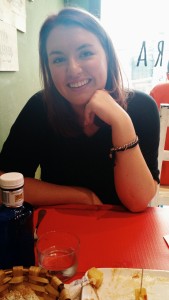 comes to food – so by the end of the meal my plate may have looked a complete mess, but I had damn well conquered that fish. Food was across from me laughing and telling me to stop looking so “disgusted and determined”, and also eating bites of my bone-free fish. She escaped unscathed while I somehow managed to bite into about a dozen tiny, translucent, ribs.

All in all, we loved Sitges. I would have loved to partake in one of the 17 beaches dotting its shoreline, giving it the nickname Golden Beaches, or visited one of the three museums showcasing Catalan art, two of which were unfortunately closed, but we will just have to save that for another, preferably sunny, day.

If you enjoyed this post you may enjoy our brief review of 3 days in Paris and if you’re into food check out a bit about snacking your way through a market in Barcelona. XoXx Fernweh & Food