Before reading this blog, I would recommend having food in close proximity.

Fernweh and I have now lived in Barcelona around six weeks and it took us approximately five of those weeks to finally make our way to the world famous La Boqueria. For those of you who have no clue what I’m talking about; La Boqueria is a food market located in Les Rambles that attracts hundreds of people each day.

I have never seen anything quite like this market. It was spectacular and made me want to spend the day going from booth to booth and taste testing everything in sight, not unlike Sam’s Club or Costco, but a million times better.  It also made me wish that my grandmother, who may cook better than most any chef anywhere, could spend a whole week with me and help me make recipes with all of the wonderful food the market has to offer.

To be completely honest, it’s a bit intimidating when seeing something like large ham hocks hanging from the ceiling or whole squid and swordfish laying on ice, but the market also offers less scary things like chocolate, freshly squeezed juices, and copious amounts of candy!

The fruit and bread are never ending. You can carbo-load on fresh baked (right in front of you) bread and then turn around and get a cone full of meat, because who doesn’t want to walk around with jamón ibérico coming out of their ears? 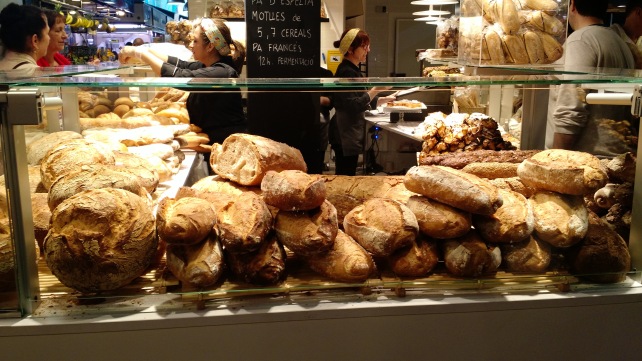 When you walk into the market you automatically just want to eat everything in sight; it’s overwhelming.

We got strawberry and mango juice, some chopped tropical fruits, and several empanadas. Since being in Barcelona, Fernweh and I have tried out several different styles of empanadas and have yet to find one quite as good as Fernweh’s recipe (which we will totally do a food blog on later), but they look awfully pretty while you’re eating them.

Mercat de Sant Josep de la Boqueria is an unforgettable experience, and an unmissable one if you come to Barcelona. Skip out on one lunch of tapas and patatas bravas and make your way to La Boqueria to feast on food handcrafted by the locals.